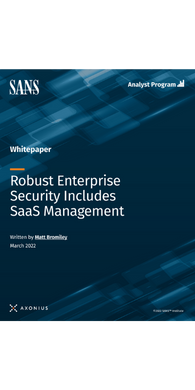 For years, we have promoted the idea of visibility as a cornerstone of enterprise security. Device management is an industry unto itself and helps organizations keep track of their various assets.

Adversary detection and response hinges on being able to “see” the myriad assets within your organization and wrap protections around them.

Today’s enterprises are not just endpoints and physical perimeters (and haven’t been for years). They include assets hosted across cloud providers and SaaS and third-party applications, just to name a few. However, security teams are often still in the dark about the various assets their organization has deployed, especially when it comes to SaaS applications.

Complete the form to download the white paper now.