The Axonius Employee Spotlight is a Q&A series dedicated to shining a much-deserved light on the movers and shakers building the fastest growing cybersecurity company ever. You can read past Employee Spotlights here. 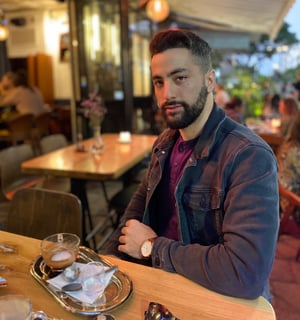 Linor Shust: Tell us a bit about your career path before Axonius. What did you do? What critical moments got you to where you are today?

Tal Kimhi: I had served in the Intelligence Unit in the Israel Defense Forces, leading projects I can't talk much about.

Once I got released, Co-founder and Chief Architect of Axonius, Avidor Bartov,  called and asked me to join Axonius. One of the best decisions I have ever made!

Linor: What about Axonius made you interested in working here?

Tal: I really wanted to join a startup that I’d be able to learn from, and have the ability to influence and make some big decisions.

I also knew one of our co-founders, Avidor, from the army and wanted to join a place led by qualified people.

Linor: What are some of the things that you and your team are responsible for?

As you can see, this is a diverse job. As a manager, it's really important to me to have independent, creative people who can solve problems by themselves.

Tal: One of my recent projects at Axonius was moving our heavy tasks to Celery job manager. The impact of this project on our system performance was huge.

We have a lot of other projects like this on our roadmap, and it's really satisfying to see the improvement of our system between releases.

Linor: What advice can you offer to someone looking to take on a role similar to yours?

Tal: In my job as a team leader, I have some different fully hands-on tasks, including researching bugs, adding new features, improving our system performance and of course, managing my team members. You need to know how to arrange your time, make a lot of context switching without losing your productivity, and get the job done.

Linor: If someone reading was interested in joining Axonius, what should they know about working here?

Tal: I can say that we have some super qualified people here. You’lll always have someone to consult and learn from if you have any questions. The company is really open to new ideas, and the impact of our hard work can be seen almost immediately on our happy customers.

Linor: Ok, now for some fun! I’m going to ask you a series of “rapid fire” questions about yourself, to help our readers get to know you a bit better.

First one! When you log on in the morning, what do you tackle first?

Tal: Usually I start my day with a morning workout, which helps me concentrate during the day. Then I'm ready to organize my tasks for the day.

Linor: What helps you focus?

Linor: How do you organize your day to stay productive?

Tal: Starting my day with writing and prioritizing my tasks, setting my meetings for the day.

Linor: How do you deal with stress?

Tal: Usually, music will do the work. But it goes better with an intense workout.

Linor: Any hobbies outside of work?

Tal: Cooking a lot of meat, playing my guitar, and learning new things.

Tal: Hanging out with my friends. Chilling at the beach in summer.

Linor: How do you take your coffee?

Tal: Cappuccino in the morning. Hard espresso in the afternoon.

Want to join the Axonius team? We’re hiring! Check out our careers page to learn more and apply.